“Hey, I'm heading to Wells NV to watch the BLM gather Mustangs and burros. I think this might be similar to what is happening in Taiji but I'M paying for it. wanna come?” email to Matt Lorden

I’d heard about the wild horse “problem” for years but paid no attention to it. I assumed our government was doing what they had to, ridding the land of these pesky over breeders. I saw a news piece on the wild horses after I returned from Taiji. I searched and found that the truth I held about the horses may not be true. On the Bureau Land Management (BLM) website, I found a list of “gathers” and sent an email to the kind folks at the American Wild Horse Preservation Campaign. They gave me specific information and how to meet-up with Deniz Bolbol, their person on the ground. A warning: if you show a little bit of interest in a cause, you will be recruited. All you have to do is show up.

My Brother Matt and I hit the road, driving through Wells to Ely, Nevada. During the two-day, sixteen hour drive, we saw thousands of cows, a few deer and antelope, but no wild horses. We didn’t see any mustangs until our drive into the “gather” when we passed a film crew watching three beautiful horses on a hillside. At 6:15AM, we met with the BLM, all 4 cars of them, off of State Route 93. They asked us to sign in, similar to the police asking for my ID at the cove in Taiji. No passport was needed but it’s odd having a government official asking you for your information. 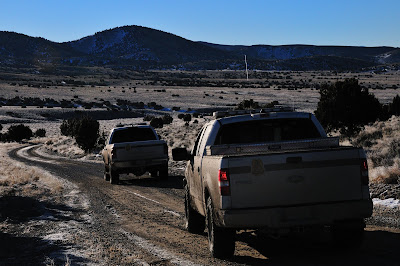 The waiting started. The contractor needed to get setup before we could move into the area. At one stop, we hopped out of the cars; the air, so cold and crisp, filled with the smell of sage. I asked one of the BLM guys what made the big hoof print on the dirt road. He said, “I have no idea.” I thought that was strange; this man worked for the BLM for 9 years and didn’t know animal tracks.

We finally got to the viewing area. Laura Leigh, Matt and I were escorted in by 5 BLM employees. Two were BLM Rangers with guns. Animal advocates are known to get unruly. We got to pick between two viewing areas. (I always gave my kids two choices when neither option was good.) Our view was obstructed by large junipers and we were kept at quiet a distance, similar to the drive fishery in Japan. Soon the helicopter drove the first band of horses toward the chute. The contractor used the terrain to hide the trap and to help guide the animals toward it. In Taiji, banger boats drove the dolphins to a natural channel in the rock that leads to the cove. We can’t see the chute. It’s in a gully. Our view of the pens was blocked by the contractor’s horses. 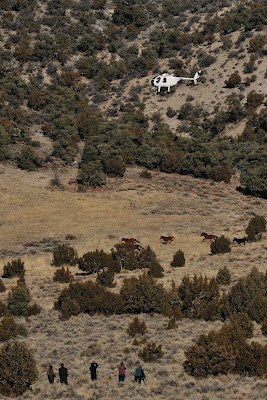 It was frustrating trying to get clear photos but the whole experience was new and interesting so I didn’t complain too much. The crew that was filming the horses on our drive in, arrived at the viewing area. It was Emmy Award winning film maker Ginger Katherns and her interns. I was inspired by the work of Louie Psihoyos. His movie The Cove motivated me to go to Taiji. Now, I’m sharing a viewing box at a mustang roundup with the film maker of Nature’s Cloud Series. At one point, Ginger discussed the finer points of the roundup (she refuses to use the word “gather”) with a BLM employee. When she was done explaining helicopter technique, trap placement, pen size, all things that made the horses’ experience better, I blurted, “why are they rounding them up in the first place?” She quietly said, “That’s a discussion for a different time and place.” She’s been at this for 18 years. I have much to learn. Looking down, someone asked what kind of rock was on the ground all around us. None of the BLM employees knew.

The BLM PR people are very nice and don’t let you out of their sight. When I needed to go back to the car, I got a friendly, “I need to go too. I’ll go with you!” I would have to grab my rocket launcher another time. As we walked back to the viewing box, we heard the helicopter working behind a hill. Once it was in view, we watched it drive the heard back and forth across the horizon for more than 45 minutes. It was painful to watch. Even the BLM representative seemed upset by the amount of time the helicopter chased the band. Finally the pilot abandoned the chase and flew off to refuel. 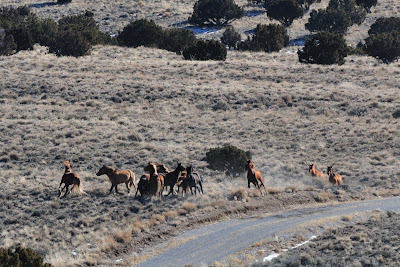 An announcement came over the BLM radio that the trap was moving. Matt and I took this opportunity to drive into the hills and explore. These public lands are, well, public and you owe it to yourself to visit them and stop and smell the air and look at the plants and terrain. 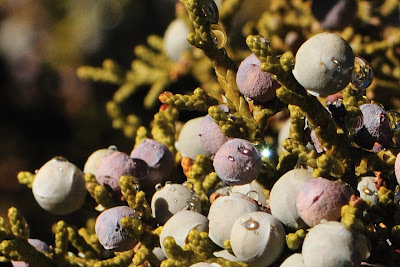 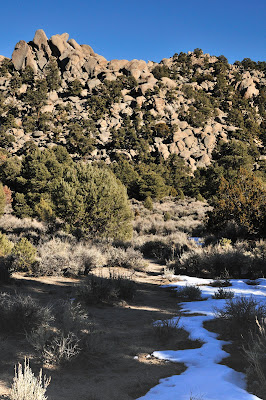 Matt and I caught up with the others and drove to the new trap site. I thought we were just going to see the setup and leave for the day so I didn't bring my camera bag or coat or... they started driving in a band right away. We needed to get in the taped off area and stay down. This trap seemed to work much better as they caught two bands pretty quickly. 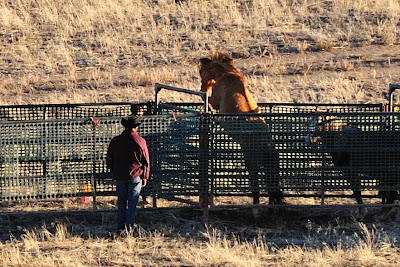 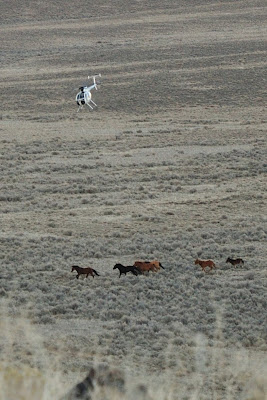 Just like in Taiji, we cheered when one got away. 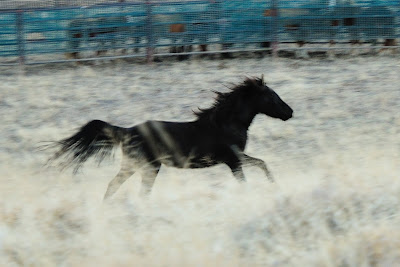 The similarities to Taiji kept showing themselves.

Both dolphins and mustangs are wild animals that live in family groups.

Both travel miles each day.

Both are seen as pests.

A helicopter is used to chase the horses, where banger boats are used to herd the dolphins.

Both driven into a netted area.

The public is kept at a distance and view is restricted.

The pretty ones are selected out for a life in captivity. In Taiji, the dolphin that aren't selected are slaughtered and their meat is sold. I guess this is where things are different. The wild mustangs that are captured, that aren't adopted, are taken to holding pens to live out their lives. There are now more mustangs in holding pens than there are in the wild. In the 1800's there were over 2 million wild horses roaming free in the USA. Today, there are less than 30,000 by BLM estimates.

Contact your legislators and tell them to save our tax dollars and let these wonderful symbols of American freedom live free.